We are meeting again.

This article was originally uploaded to Salford Red Devils.

After an impressive victory over Leeds Rhinos in their last outing, Salford now look ahead to a Friday night’s clash against Hull Kingston Rovers with the aim of starting the Qualifiers and forging some momentum for the course of the seven-game campaign.

The Red Devils will head into this weekend’s game high on confidence following a dominant display against Leeds Rhinos a fortnight ago in which they managed to overturn to 2017 Betfred Super League champions despite being reduced to twelve men for an hour.

Jackson Hastings made a scintillating twenty-minute debut in which he crossed for a try as well as sending Niall Evalds on his way after Ryan Lannon had levelled the scores early on. Evalds would cross for a second in his return to the AJ Bell Stadium while Ed Chamberlain, Rob Lui and Josh Jones would all also score in a memorable performance.

Likewise, Hull KR had a game to remember last time out. KR coach Tim Sheens side had the duo of Danny Tickle and Craig Hall to thank on a wet Friday Night under the lights at the KCOM Stadium in a 20-16 win against fierce rivals Hull FC.

KR put an end to a seven-game losing streak against their cross-city rivals when Tickle’s penalty on the hour got Rovers’ nose in front, where they managed to stay for the big derby win.

Hall managed to mark his second debut back at Hull KR following his re-signing on loan from Leigh Centurions by helping himself to two tries and kicking a goal on his way to the Man of the Match award.

Salford managed to turn their fortunes around last time out against the Leeds Rhinos and the additions of Jackson Hastings, Joey Lussick and Jansin Turgut have only added to that momentum in recent weeks. The Red Devils will be looking to make it back-to-back victories and get their Qualifiers campaign off to a flying start.

Hull Kingston Rovers are enjoying a solid run, a loss against Warrington Wolves a few weeks ago is the only mark by in a purple patch with results over Hull FC, Widnes Vikings, Huddersfield Giants and a victory over the Red Devils the last time the sides met.

Stand Off McGuire, who signed a two-year deal for Hull Kingston Rovers ahead of the 2018 season has had a prolific Super League career, becoming the first player to ever score 200 tries.

While only making 14 appearances for the Rovers, McGuire has been instrumental for the Tim Sheens side when he has been involved and he crossed for a hat-trick in the last meeting between the sides in early July.

Lui will come into this weekend’s fixture brimming with confidence following a magnificent Man of the Match display against Leeds Rhinos in which he crossed for a try and provided five try-assists. Lui is central to everything the Red Devils do going forward and if he is on form at KCOM Craven Park expect Salford to cause KR issues. 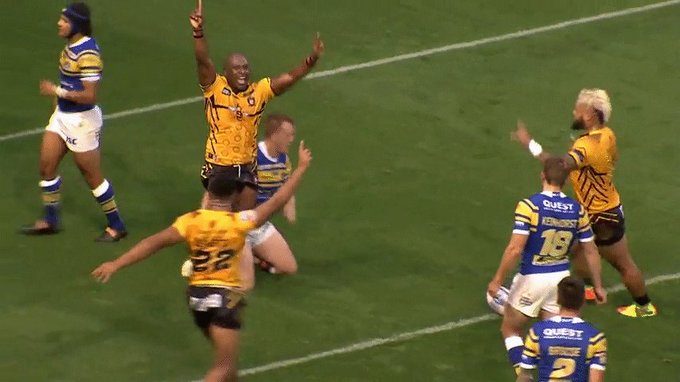 Congratulations to Rob Lui who was selected as last night’s Man of the Match by Official Match Sponsor – @SeduloMCR.

This key battle could very well decide who wins this Qualifiers opener. Both men will be looking to control the game for their respective sides and can bring that little bit of creativity which can tip a game.

New signing Jackson Hastings is named in the 19-man squad despite leaving the field early on his debut. Fellow Australian and new acquisition Joey Lussick could be in line to make his debut following his arrival at the AJ Bell Stadium.

Kris Welham and Craig Kopczak both return to the squad after spells on the sideline and could return to start Salford’s campaign to retain their place in the Betfred Super League. Jack Littlejohn, Logan Tomkins, George Griffin, Luke Burgess and Kriss Brining remain sidelined with injuries.

Hull KR have a few names back at their disposal, Junior Vaivai, Danny McGuire, Shaun Lunt, James Greenwood and Joel Tomkins all return for round one of The Qualifiers.

Todd Carney, Craig Hall and Ben Crooks all unsurprisingly make the squad after debuting in the dramatic derby win against Hull FC.

KR will be without the injured Lee Jewitt and the suspended pair of Mose Masoe and Maurice Blair. However, Will Oakes will be available again after serving his one-game suspension.

With this being the opening weekend of The Qualifiers all points tallies are reset for the competition and starting at zero points gives every side a chance to almost start the season again.

Both Salford and Hull KR will be hoping to get off to a good start and begin building some momentum with the hopes of retaining their place in the Betfred Super League.

With The Qualifiers at the toughest they’ve possibly ever been with Hull KR, Leeds Rhinos and Widnes Vikings having Betfred Super League experience alongside some intriguing and talented sides from the Betfred Championship including winners Toronto Wolfpack, surprise package Halifax RLFC and French outfit Toulouse Olympique. Both Salford and KR will know a strong start is paramount.

We Need You!Save money by purchasing your tickets online for our games against Widnes and Toronto.Simply click here!

View all posts by Matt Tandy

This site uses Akismet to reduce spam. Learn how your comment data is processed.