We are meeting again.

This article was originally uploaded to Salford Red Devils.

Following his arrival late last week the Red Devils newest recruit – Jansin Turgut – has settled in almost immediately and is looking to hit the ground running at the AJ Bell Stadium.

Turgut, who is available for sponsorship, said: “I think we’ve all clicked as a group straight away and you know, they’ve been very welcoming, and I get on well with Watto [Ian Watson] the Head Coach.”

“Obviously it’s a very professional setup, the same as Hull FC, so it’s quite easy to adapt in that way. I’m trying my hardest to fit in with the lads and train hard as well which is hopefully that’s helping me to adapt.

The versatile back has previously captained Hull FC’s academy side and ended a three-year stint with the Black and Whites to join Salford but he is keen to impress following the move.

Turgut said: “I’m just trying to put my best foot forward. I’m contracted until the end of the year and I’m going to try to bring as good a performance as I can.

“I want to do the small things, the small details that maybe the fans can’t see but the lads will see and benefit from.

“Doing the hard work and doing the one percenters as well, hopefully I can do enough to get the wins and get Salford where they need to be.

“The ultimate aim is to try and earn myself a contract for next year.” 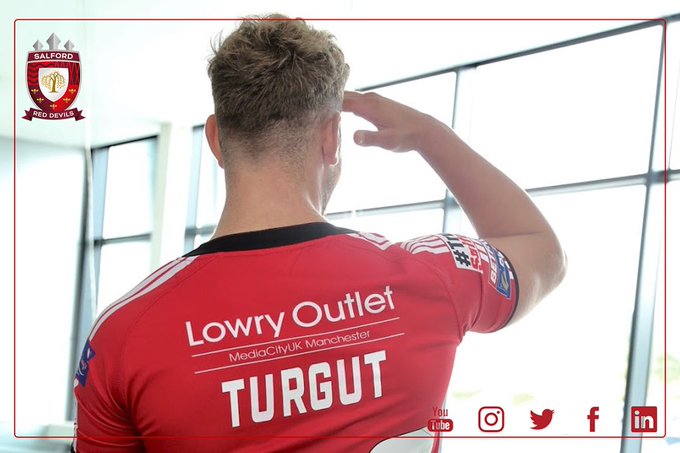 Looking forward to his time at @SalfordDevils.

There’s some more of @JansinTurgut’s behind-the-scenes headshots over on our @Instagram – SalfordRedDevilsRLFC.

Looking ahead to the The Qualifiers, Turgut is optimistic about Salford’s chances of retaining their Betfred Super League status.

Turgut said: “There’s bags of talent in the team, I can see that already straight away.

“Everybody’s hard working and training has been intense straight away and I think the biggest thing is the confidence going around at the minute, coming off a big win against Leeds.

“I think we’re definitely going to be finishing in the top half and be away from the Million Pound Game.

The Red Devils fixtures see them host Widnes Vikings, Toronto Wolfpack and Toulouse Olympique at the AJ Bell Stadium and this means the side avoid any long distance travelling which Turgut believes does benefit the side.

“Obviously that unsettlement of not knowing the places and having to travel away could impact the players mentally so it’s a bonus for us that they’re home games.”

View all posts by Matt Tandy

This site uses Akismet to reduce spam. Learn how your comment data is processed.